If you are a tenor, you are lucky because your vocal range may be similar to the famous tenors. If you want to know some of these famous tenors, you can check out this list of top tenor singers at present.

Perhaps, you may be fascinated with the vocal range of many famous singers, such as Freddie Mercury, Michael Jackson, or Paul McCartney, and you may be wondering how you can categorize their voices. Well, the abovementioned famous singers, of course, belong to the vocal category of tenors. Moreover, many recognizable artists are tenors.

Tenors have high voices. Their voices, of course, range between the alto and the baritone. The tenors belong to the highest range of male voices. Hence, in the operatic world, tenors are more often the show’s stars.

In the modal registry, the tenor voice belongs to the highest male singing voice. It lies between C to C5 (High C). with a low extreme of A2 or 2 octaves below the middle C. In its highest extreme, some tenors can reach up to F or one octave over the middle C.

The main point is that—tenors have a high voice. Hence, a lot of tenors can belt high notes, and thus, most of the main vocalists of popular bands are tenors likewise.

Jonas Kaufmann is an operatic tenor from Germany. He performed in Carmen as Don José. in Adriana Lecouvreur as Maurizio, in Tosca as Cavaradossi, and many more. As an accomplished Lieder singer, he is well known for roles in operas that are certified box-office draws. He is, therefore, considered as one of the most versatile tenors at present.

Jonas Kaufmann has an attractive voice, characterized by manly darkness. His voice carries that expansive and passionate depth that enthralls his legions of fans. At present, he has matured into a highly established artist that makes his career flourish. Kaufmann, of course, is at the forefront of the list of best tenors.

Plácido Domingo is a world-famous artist, characterized by multifaceted talents. He was born on January 21, 1941, and was launched to stardom in 1966 when he performed the title role in Ginastera’s Don Rodrigo in its U.S. premiere. Soon after, there has been no stopping the surging popularity of Placido Domingo. In July 2011, he performed in his 136 roles, giving him more roles than other tenors in their lifetime.

Plácido Domingo is considered as one of the finest tenors in the history of opera. He is also one of the most influential singing actors and is considered a major force in the operatic scene. His repertoire has already included 150 roles with more than 4,000 career performances.

Aside from winning 14 Grammys as well as Latin Grammy Awards, he is also a highly successful recording artist. Many of his recordings have achieved silver, gold, platinum, as well as multi-platinum awards.

He released his first pop album entitled “Perhaps Love” in 1981. This helped spread his name, not only in the opera world but also in the mainstream pop culture. In this album, he sang the song with the late John Denver. This album has sold more than 4 million copies around the world. It also afforded him a lot of television guesting.

He also performed and starred in many televised opera movies. Afterward, he began performing with his fellow popular tenors, like Jose Carreras and Luciano Pavarotti. The three made “The Three Tenors.” This group’s first three recordings indisputably became the best-selling album of the classical genre.

Piotr Beczala was born on December 28, 1966, in Southern Poland. He trained in Katowice at the onset. Then, he studied in Switzerland under Sena Jurinac. He first performed with the Linz State Theatre starting from 1992 to 1997. Later, he became a mainstay of the Zurich Opera.

From 2004 to 2006, he made his international debuts, and in 2004, he debuted at London’s Royal Opera House in Der Rosenkavalier as the Italian Tenor. He had performed in other roles like the title role in Faust in 2005 and the Duke in the Rigoletto.

He made his American debut in Eugene Onegin as Lensky and as the Duke in Rigoletto in New York. Beczala’s La Scala also debuted in January 2006 and won an award in Munich Opera Festival.

Beczala has a colorful voice that typifies an Eastern voice. It is characterized by depth, and his acting talent is also characterized by versatility. Beczala received many recognitions and awards, including the International Opera Awards as Best Singer.

Aside from acting in opera, Beczala also signed a multi-album contract with the production Pentatone. His first solo was then released in the year 2020.

David Norris Phelps is a versatile artist with a range of talents. He can write and arrange songs, yet, he is well-known for being a tenor. He is a member of the Gather Vocal Band. In this band, he shared the tenor part with his fellow bandmate Wes Hampton.

As an artist, he already released some solo albums. These albums included four Christmas collections. He also made an appearance on Extreme Makeover Home Edition on January 13, 2008.

Phelps is an accomplished artist and a multi-awarded one. He received 12 Dove Awards with the Gaither Vocal Band. He is also a 4-time Grammy Award nominee. He also had projects that reached the platinum level.

Phelps graduated from Baylor University. At present, he is considered one of those artists with spectacular voices. His vocal range is characterized by a seemingly unlimited vocal range that covers more than 3 octaves. He is also gifted with the ability to communicate the meaning of a song to his listeners emotionally. Thus, he often receives standing ovation in most prestigious venues.

Juan Diego Flórez was born on January 13, 1973. He is of Peruvian descent. As a Peruvian operatic tenor, he starred in bell canto operas. His effort paid off on June 4, 2007, when he was awarded the Knight Grand Cross—Peru’s highest decoration.

Juan Diego Flórez has a great vocal range. His chest and head registers are well integrated, and you never notice any audible break in his passaggio. He can very well execute the trill of bel canto and other ornaments.

He is a master of the coloratura that you will readily notice in Semiramide and Matilde di Shabran. Flórez also had been nominated in the 52nd Grammy Awards for Best Classical Vocal Performance for Bel Canto Spectacular, his album.

Flórez was awarded the Premio Abbiati 2000 an award given by Italian critics for the annual best singer. Other awards include the Rossini d’oro, the Bellini d’oro, the Tamango Prize, the Premio Aureliano Pertile, and the L’Opera award for his 2001 performance at La Scala in La Sonnambula.

Rolando Villazón was born on February 22, 1972. He is a Mexican tenor who lives now in France. He became a citizen of France in 2007. He first became internationally known when he was awarded both the first prizes in Placido Domingo’s Operalia, a competition for upcoming opera singers in both zarzuela and opera in 1999.

Afterward, he made his debut in the European theatres that same year and played the role of Des Grieux in Manon in Genoa. Soon after, this debut was followed by other debuts at Deutsche Staatsoper Berlin and Opéra de Paris.

He sang Rodolfo when he was in Munich in 2000 in La bohème. Soon after, in 2002, he also played the role of Rinuccio in 2002 in Gianni Schicchi. Again, he sang Rodolfo in England in 2003 at the Glyndebourne Festival Opera.

In 2007, he was diagnosed with a congenital cyst in his vocal cord and underwent surgery to remove the cyst. Thus, in 2007, he canceled a lot of scheduled engagements. He made his comeback in March 2010 in L’elisir d’amor singing Nemorino. This happened at the Vienna State Opera. Afterward, he engaged in a series of recitals.

He also debuted as a stage director at Opéra de Lyon for the production of Werther in January 2011. Recently, he is engaged in several Mozart tenor roles in operatic and concert performances.

Lawrence Brownlee was born in 1972 in Youngstown, Ohio. He is an American tenor associated with the repertoire of bel canto. He had a highly musical childhood and can play various instruments like guitar, trumpet, and drums. He was also involved in Gospel singing in the church. His first gigs happened in Sandusky, Ohio, at an amusement park wherein he sang pop tunes.

Soon after, he attended Anderson University in the state of Indiana to get his undergraduate degree. He also further studied at Jacobs School of Music at Indiana University for his graduate studies. There, he got acquainted with soprano Costanza Cuccaro, Fritz Robertson, and David Starkey. Brownlee also participated in programs like the young artist programs at the Wolf Trap Opera Company and Seattle Opera.

His professional debut onstage happened in 2002 in Rossini’s The Barber of Seville as Almaviva with Virginia Opera. He made his debut at Metropolitan Opera in 2007 in Barbiere di Siviglia. This role became his trademark and more recognizable performance.

Soon after, he appeared in Il Barbiere in cities like Milan, Vienna, Madrid, Berlin, Baden-Baden, Munich, Dresden, Hamburg, New York, Washington, Seattle, San Diego, Boston, and Tokyo. He had many highlights in his career.

Yet, in concert, Brownlee had performed with Houston Symphony in Handel’s messiah as well as with the San Francisco Symphony. He also gave recitals and had been a featured guest in many Gala Concerts. He also tried the role of Syme in 1984 in its London’s world premiere and also played Charlie parker at Opera Philadelphia in Yardbird.

Javier Camarena was born on March 26, 1976, in Xalapa, Veracruz. He thrives in bel canto roles of the Rossini, Donizetti, and Bellini operas, such as Arturo in I Puritani, Edgardo in Lucia di Lammermoor, and Conte Almaviva in Il Barbieri di Siviglia. He also played leading roles in Verdi and Mozart as Leading tenor roles.

He won praise for his astonishing voice in his performance in Lucia di Lammermoor as Edgardo at the Teatro Real Madrid in the year 2018. His voice, of course, is characterized by astonishing beauty with thrilling and secure high notes as well as enthralling timbre. Moreover, Camarena is an Opera News awards’ recipient for 2020.

Roberto Alagna was born on June 7, 1963. He was born in France and is a very popular French tenor. In 1981, he obtained his French citizenship while retaining his Italian citizenship. His parents, of course, are Sicilian immigrants.

He started his singing career in Parisian cabarets while singing pop. He then transitioned to opera, influenced by Mario Lanza films and egged by his learning of the historic tenors’ recordings. He is a self-taught artist until Gabriel Dussurget discovered him. Dissurget was the co-founder of the Aix-en-Provence Festival.

His professional debut happened in 1988 in La Triviata as Alfredo Germont. He gained international prominence at Covent Garden as he played Romeo in Roméo et Juliette in 1994. Soon after, there was no stopping his popularity. At present, he is working for the restoration of the neglected French operas.

Great tenors are fascinating with their awesome vocal ranges that can enthrall the audience anywhere they perform. With their expansive vocal range, they are quite a pleasure to listen to and can bring in astonishing vocal performances. Moreover, their voices soar high with every great performance. In the opera world, they are truly the stars of the shows. Although there are famous baritones and mezzos, tenors get most of the starring roles in most operas. 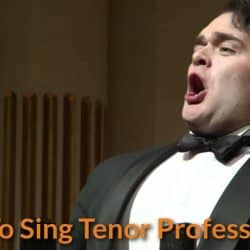 How to Sing Tenor Professionally