Selecting the type of song is the primary key to sing and play guitar at the same time.  If you choose a simple song which you can sing well accompanied by the guitar, and one that complements your voice very well, there’s no doubt that you can do it perfectly.  The more difficult the song is, or something that your voice cannot match will just cause frustration on your part, and an ultimate reason for you to decide quitting your singing ambition.

Steps On Learning To Play Guitar and Singing Simultaneously

Your ultimate aim here is to be able to master the song entirely.  When you’ve done that, it’s time for you to play the guitar.  When you’re listening to the song, observe the complicities and take note how the chords vary.  Then, you can begin to play guitar and sing at the same time.  Don’t fail to practice regularly until you have mastered the variations in the chords.  Keep on practicing as much as you can, and if you can practice singing separately with playing the guitar, that will make the process a lot easier.

Step 2: Play the Song with Guitar, No Singing

When you have mastered singing and playing the guitar separately, bring them together and practice more.  But when you’re strumming the guitar, make it longer before you start singing.  You should hum the song first while playing the guitar.  This way, you can build a connection between the tune and the lyrics.

Learning to isolate the guitar parts from all the vocal parts is necessary for you to achieve.  You have to study the way of singing that blends well with the rhythm. You should learn the vocal parts with the use of a quarter note beating technique.  Try to determine which words are blending with the beat, and which ones are getting off beat.

Knowing the parts of the guitar very well is one important thing that you should be able to do in order to make an autopilot.  In this process, you should also utilize a quarter note beat, and let it serve as the bridge between the guitar parts and your vocal parts.

Therefore, the 1st skill that you should be able to develop is your skill in playing the guitar.  Count it out loud regardless of how complicated are the parts of your guitar.  The best thing that you can do is to start with some 4/4 simple time signature and perhaps strumming a quarter note in a down stroke pattern.

There is a quick way I found to be helpful to improve your synchronization process. It’s called “Multi-tasking“

Just try to do something else while playing the guitar, such as watching TV, talking or having a conversation. It will be very helpful to get rid of your tension / over-focus on the chord progression on the guitar. Most beginners are having the same problems of worrying that they will play the song wrongly. Thus, they were paying the full concentration on the guitar part by ignoring the singing part altogether.

Step 4: Start to Play Guitar And Sing Along

In this step, one important thing that you should keep in mind is that the vocal and the guitar parts are both relying on the groove.  Therefore you should think of them as two related things.

This is because the act of singing while playing the guitar is already confusing that can make the process harder for you.  As you go on, progress slowly to singing along with the guitar.  When you start singing with lyrics, practice the 1st verse until you become very familiar with it.  Then, it’s time to move to the next verse.  Whenever you start singing a new verse, sing it from the start, and start moving to the next one with great ease.

This will enable you to create a smooth transition from one verse to another until you can playing guitar and sing along perfectly at the same time.  Once you can feel that you’re doing it greatly like an expert, you can begin selecting more intricate songs, but remember that they should not be very difficult for you.  If you practice constantly, it will be a lot easier for you.  The gauge for you to determine if you can already singing while playing guitar expertly is when your chord varies involuntarily and automatically while singing.

Useful Tips & Techniques You Can Use

Play The Guitar While Having a Conversation

If you play the guitar and at the same time think of something completely random, then you know you are there, and you can take on singing. It is one of the best tests to see if you are ready or not to take singing while playing the guitar.

Understanding and playing rhythms can help every aspect of playing the guitar and singing at the same point. Keep in mind about the difficulty level. Don’t over complicate things for yourself by choosing a song, which is above your skill level. This will leave you with a feeling of defeat and frustration.

Begin with easy songs. Or pick the songs, which know well. A song like “Happy Birthday” can be picked up in the beginning as it has very few chords, an easy strum pattern, and lyrics which are easy to remember.

Practice Strumming With A Metronome

If one makes mistakes with strumming patterns or with fingerstyle patterns, then there is a big possibility that you’ll struggle with singing too. So have a grip of strumming the guitar before you pick up singing.

Practice with a metronome for better rhythm and timing. It might feel a bit restrictive at first, but in a long time, it will help you to become a more consistent player.

Only 10 minutes of practicing with a simple strumming pattern with a metronome will give you great results in just a few weeks.

Tips on Switching Your Focus

In some songs, there are some tricky parts between the vocal lines. For this stuff, you need to learn how to switch focus from singing to guitar or vice-versa. It sounds a lot tricky, but it is not. A little practice goes a long way!

Why Some Singers Just Can't Sing And Play Guitar At The Same Time? 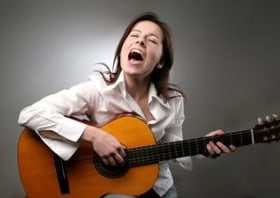 Are you having the synchronization problems  on singing and playing musical instrument at the same time?

If you are unable to singing while playing musical instrument, it could mean that there is a problem in the synchronization process between the song that you’re singing and how you’re playing it on the guitar.  In this kind of situation, you will remember how difficult it was during the time that you were still practicing the sequences of scale on your guitar for the 1st time.

It also reminds you on the difficulties you encountered when you were playing your guitar in a consecutive way going up and down, while picking alternately.  At that time, you needed to synchronize your 2 hands to do different things.

When you’re on the initial stage of learning how to crawl, don’t try to learn how to walk; that’s a great principle of life that is also applicable in both singing and playing guitar.  First thing you have to do is learn the song.  Try to listen to the tune and words of the song carefully, and analyze how they complement with each other.  Study the lyrics of the song and try your best to get the correct pitch in singing it. 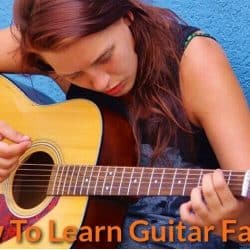 How To Learn Guitar Fast 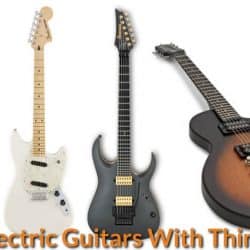 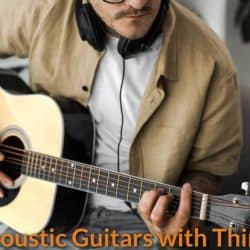 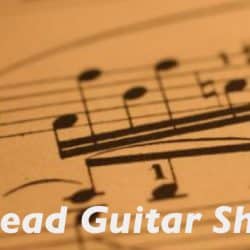 How To Read Guitar Sheet Music (For Beginners) 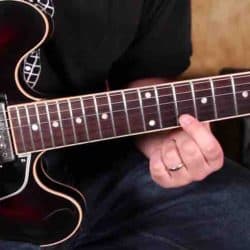 3 Blues Guitar Lessons: Quick And Simple Ways To Play Like A Pro