You came to the right place if you are looking for the compatible Samson Meteor Mic stands that work perfectly with your stylish Meteor mic. We have listed out all the details and factors you must know before buying one.

Meteor is made for universal and general solutions for home recording purposes. Samson’s Meteor Mic as its name would suggest. It is designed in such as way that it looked like a meteor. And the design of attached tripod legs is mimicking the meteor tails. Its design is very outstanding and futuristic. Many people bought the Samson’s Meteor Mic just because of its stylish and stunning design.

If you are using this Meteor mic mainly for conversations, voice recognition software, video calls and other general purposes. Then, the desktop mic stand and desktop boom arm are the ones you can use.

If you are a serious podcaster, you can consider using the boom arm with pop-filter to improve its recording quality further.

For singers, band, and guitarists; the floor standing boom mic or floor standing mic are more suitable for this kind of applications. If you were always recording your vocal in sitting position, you should consider mounting your Meteor mic on the desk boom arm.

The thread mount size of the Samson’s Meteor is 5/8″. You have to make sure all the mic stand’s mounting screw size is 5/8″ too. Otherwise, you have to buy an additional 3/8″ to 5/8″ screw adapter for that.

The thread mount size is the most important factor and criteria you must follow whenever you are looking for a compatible mic stand for virtually any type of mic.

The Meteor Mic only weighed 10.6 ounces, And it’s relatively lightweight compared to other USB microphones in the market. The mic stands holding capability wouldn’t be any issue at all, as most mic stands even the most simple desk boom arms can handle its weight.

Why Should You Get A Mic Stand For It?

The meteor mic is adjustable to 6” height with its standard 3-leged mic stand. It’s quite short compared to other branded USB microphones of its kind. Some people might encounter a certain degree of difficulty to speak or sing comfortably to the mic.

The Meteor Mic is very sensitive to any noise that comes from the desktop itself. The keyboard typing sound, desktop tapping/scratching noise, and minor vibration noise are directly picked up by the mic. Just because it is too “Short.” That’s what I assumed…

You will need to use other types of mic stand if you want to upgrade your Samson’s mic setup with shock mount or pop filter. You have to make sure that the threaded mount of the shock mount is compatible with the mic stand you going to buy.

Indeed, you can improve the meteor mic’s recording quality dramatically just by replacing with the right mic stand for particular recording purposes.

The RODE PSA 1 is a high-end desktop boom arm that more suitable for the advanced/professional users. And it’s built for handling the heavy-weight mic setups. Its overall built-up and structure are more robust and tough than the Neewer Boom Arm. It’s capable of handle the weight of mic setup up to 2.4 pounds.

And it also included a 3/8″ adapter in the box. It also comes with the cable wraps attached to the boom arm to keep your mic cable organized and tidy.

This Knox is another high-end boom arm mic that is similar to the RODE PSA 1 that we have reviewed above. This Knox’s boom arm is capable of holding up the mic setup that weighted up to 5 lbs.

This kind of mic strong enough to support the weight of a heavy mic setup. If you plan to set up your Samson Meteor mic with additional Shock-mount and pop filter, then I would suggest that you should go for this Knox boom arm or the Rode PSA 1 that we have discussed previously.

I would say that this Neewer suspension boom arm can be considered as the most affordable Meteor desktop boom arm you could ever find it the market. The built-up is quite good which is made for light-weight mic application (Great! Meteor mic is not that heavy…). And it’s not suitable for the heavy-weight microphones.

The screw size of this boom arm is 5/8″. Thus, it’s compatible with your meteor mic’s threaded mount. However, it also includes a 5/8″ to 3/8″ adapter in the box too.

And the only thing I don’t really like about this Neewer boom arm is that the spring that attached at the joints will cause a little bit of noise when you adjust its boom arm.

After all, it’s quite a good desktop boom arm for beginners. You can go for more pricey ones if you want a very professional boom arm set up.

This On-Stage 5/8″ Thread mini desktop boom stand might be a good option if you are looking for a light-weight, space-saving and durable desktop mic stand that is sturdy enough to hold up the Samson Meteor mic which is only weighted at 10.5 ounces.

It’s a collapsible and foldable tripod boom stand. Its extendable mic length has made the MK-10 one of the most portable and flexible boom mic in the market. Furthermore, it’s very light-weight despite the fact that it’s made with the solid steel construction. It also includes a mic clip in the box. The only downside is that it will not be suitable for those super heavy-weight mic setups. And there wouldn’t be any problem at all to handle the Meteor Mic as it’s only 10.6 ounces. 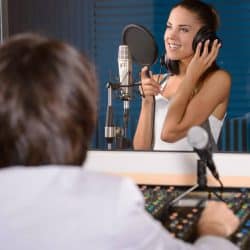 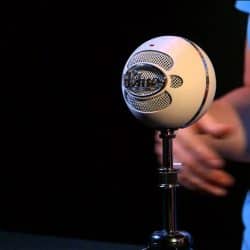 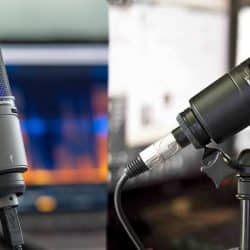 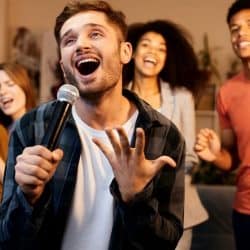