You are here: Home / Learn Piano / 9 Types of Digital Keyboard

The musical instrument on which sounds can be played by pressing keys or a row of levers corresponding to different musical notes is your typical keyboard. The notes are arranged in a chromatic or musical scale for the 12 notes of an octave with each one a semitone below or above the adjacent note, and with the bass going toward the left and the treble to the right. A beginner would know this much about keyboards.

The electronic keyboard has evolved from the time it was invented in the 1800s to the present as technology improved over the years, and different types were made. When you check out online sites such as the Musician Friends, you might be overwhelmed by the wide variety of keyboards available. It is necessary that you know and understands what each one is meant for and what exactly it is capable of producing to ensure that it would meet your requirements. Get to know the different types of keyboard piano and determine which one you ought to buy.

The digital piano, as an electronic keyboard, mimics the feel and sound of the acoustic piano. It is different from the synthesizer that makes use of electronically produced sound waves to come up with electronic sounds. The first company to roll out digital pianos was Yamaha. It rolled out the Clavinova YP-40 as the very first digital piano that hit the market.

At present, there are myriads of keyboard pianos in the market. Thus, choosing the right digital piano may become a bit confusing.

This type of electronic keyboard instrument is an alternative to the acoustic piano with its simulated hammer action and 88‑weighted keys (although a few have 61 keys) that can reproduce the feel of a piano with its resistance. It also closely resembles the sound produced with digital sampling. The samples are basically short recordings of how each key would sound. Several recordings of each key are also done to capture different degrees of pressure along with having the soft, sostenuto, or sustain/damper pedal depressed. However, extensive and detailed recordings can only be found in instruments with big enough storage. It may then fall short in terms of the dynamic range because the sound produced would only be as good as what was recorded and the software or technology used for simulation.

The digital piano sound comes from a speaker, and its resonance is simulated. An acoustic piano sound comes from the string vibrations that are triggered and would then resonate. This electronic instrument does not require multiple tunings because it does not get off-tune throughout its lifespan. It generates consistent sound quality, timbre, and volume because it relies on its digitally modeled recorded sounds, sensor-sensitive keys, electronic sound generator, amplifier, and speaker. It has a lot of features, including the recording functionality, rhythms, built-in effects, and comprehensive learning systems that are worth looking at.

Its price is dependent on the model with the features that you want, but even if you get something that’s expensive, it would be worth it as it has a long life span because of its resistance to the usual wear and tear. As technology continues to develop, it might become outdated, but you can still use it for what it is intended for.

Digital pianos come in various designs, and it can be a stage piano that is ideal for live performances on stage or a console piano that is most suitable for home use. A stage piano is portable and has a detachable stand so you can easily transport it and perform with a wide range of high-quality sounds and effects such as e-pianos, acoustic piano, clavinet, strings, and the Hammond organ at your fingertips. It does not usually have built-in speakers or amplifiers. Still, it has an output jack that you can plug into an external amplification system or keyboard amplifier that can produce over 300 watts providing enough power for on-stage monitoring in jazz or rock performance settings. It also has a detachable sustain pedal that can be plugged into a jack.

The stage piano usually has more sounds or voices than the console piano but fewer sounds than the typical electronic synthesizer. Some have master keyboard functions that enable control of a larger set-up with various MIDI (Musical Instrument Digital Interface) instruments. Some have fully weighted keys that made the instrument heavier but allow better touch control and piano-feels while some with semi-weighted keys may not be as heavy but provide less control for faster playing. Usually, it has 88 keys, but some have 76 keys.

A portable keyboard or electronic keyboard is basically for beginners as its features and functions have enough versatility but more comfortable to learn and get used to. The learn-to-play functions make it ideal for those who are new to this. Its sequencing function is more basic than that of an arranger. It also offers a variety of sounds or voices that enable performing different styles of music. This keyboard does not usually have weighted keys, but it has 67- or 71-touch response keys, which means you can get louder or quieter tones depending on how heavily or softly you hit the keys to express your emotions when playing music. With the USB connectivity feature, you can easily transfer sounds and download music to and from the computer or the internet.

Users who already know their way around the keyboard should be able to handle and enjoy a more challenging instrument such as the arranger keyboard. It is challenging in the sense that it comes equipped with more tools and features that would enable you to become a one-man band as you play along with the prepared or recorded WAV audio file or MIDI sequence. With the variety of voices or instruments available such as organ, drums, piano, and horns, you can play each one and mix or arrange them to create the final song. You can also use the automatic accompaniment styles or musical riffs as you play chord progression. The backing tracks would automatically match the rhythm, tempo, and style of what you are playing – making it sound like it’s a full ensemble. This is most suitable for live performances.

This electronic keyboard instrument was originally designed to replicate orchestral sounds as it was derived from theatre organ, harmonium, and pipe organ. The most widely known is the Hammond organ that has two keyboards, called manuals and a set of pedals, which was patented by its inventor Laurens Hammond in 1934. It has since evolved into the digital organ that is used mainly in churches sounding like a pipe organ and the Hammond-type organ that is mostly used for jazz, rock, and pop music.

The digital organ can produce percussion and orchestral sounds as it uses Digital Signal Processing (DSP) technology or synthesis technology to create that pipe organ sounds. It is definitely cheaper, space-saving, and easier to maintain than the traditional pipe organ, making it a viable alternative for church use. It also features internet and MIDI connectivity as well as various effects.

Portable Hammond organs are compact and lightweight but with most or all the features of the traditional Hammond organ. It has real mechanical drawbars, touch-response percussion, and chorus-vibrato. Some of the sound selection available includes wind instruments, orchestral, accordions, acoustic/electric pianos, and classic pipe organ. It has connections for MIDI, Leslie speaker cabinet, headphones, and footswitch.

A synthesizer looks like a typical keyboard, but it functions quite differently in that it is able to produce and modify sounds through various methods such as additive synthesis, subtractive synthesis, and frequency modulation synthesis. The sounds are basically shaped or altered using low-frequency oscillation (LFO), filters, and envelopes. With analog synths, the electrical signals are manipulated to come up with a unique sound. The digital synths, on the other hand, uses DSP technology in creating sounds; it has sampling capabilities or pre-recorded sounds that you can modify and played back in a variety of ways. It also has built-in effects, including reverb, chorus, delay, and more. There is also the hybrid synth that is essentially a combination of the best in analog and digital features. Synths mostly differ in how the sound is processed and generated.

A typical keyboard workstation would have all the tools for composing, recording, and producing. Composers and producers can work anywhere because they can get everything done using just this one. There are compact keyboards with 49 or 61 velocity-sensitive keys and full-sized keyboards with 76 or 88 keys.

Sounds are generated using various methods that include analog modeling and sample playback. It has excellent sequencing and recording capabilities. It can handle more notes and multitrack sequencing from several musical instruments and vocals, simultaneously or one at a time, and then be able to access and manipulate them to get the result that you want. Having a lot of options from quite an impressive number of built-in tones, accompaniments, synth sounds, and effects from its massive library as well as the capabilities to customize them would undoubtedly open a lot of possibilities in making music. It usually comes with MIDI and USB connectivity so that you can sync the workstation with the recording software on your computer.

A MIDI controller is an electronic keyboard that has sliders/faders, buttons, pads, knobs, and wheels used to send MIDI signals or commands through MIDI-5 pin cable or USB to computers with Digital Audio Workstation (DAW) or to MIDI-capable digital and analog musical devices. Without a sound module, it is not capable of producing sounds; it is just the “gateway.” Although keyboards with MIDI capability can be used as a MIDI controller, it would not have the level of integration and flexibility of control that a dedicated keyboard MIDI controller can do. There are compact models and 88-key controllers. You have to determine if you want keys that are weighted and velocity‑sensitive to get that piano-type feel or the Aftertouch in which you can assign pitch bend, vibrato, or other effects to a key.

A MIDI control surface is a hardware device or a human interface device (HID) that controls the functions of DAW. It is usually integrated into the MIDI controllers. It controls different aspects of producing music such as sequencers, signal processors, mixers, virtual instruments, samplers, and DJ software. The control surface looks like a typical mixing console with buttons, knobs, and faders. It can be connected to the computer through USB, MIDI, Ethernet, or FireWire.

With different types of keyboards to choose from, it is likely that you will find one that would meet all your requirements. Just keep in mind that you need to check the features and specs before you decide to buy. If you are a beginner, you need not spend so much money to enjoy playing or using the electronic keyboard. Start with something simple and just buy a new one if you feel like you are up to the challenge of using one with more complex features and functionalities. 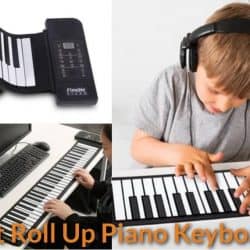 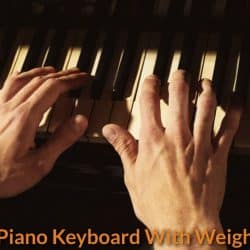 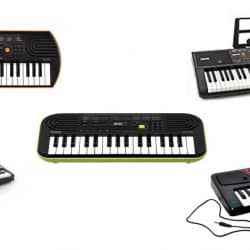 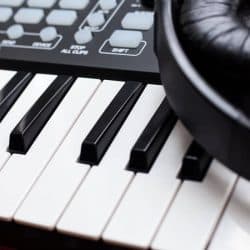