Synthesizers transform raw music into different genres of music. The tabletop synthesizer is a must-have for every single songwriter, music arranger, sound engineer, disc jockey, and anyone who wants to mix music for personal or commercial use.

Synthesizer is one of the very powerful electronic musical instrument equipment in music production. It produces incredible audio when played with regular music instruments such as keyboards, guitars, and the like or even those connected through computer software. Anyone can easily process music through different techniques such as additive and subtractive synthesis, as well as frequency modulation synthesis. These techniques, through the use of low-frequency oscillators, envelopes, and filters, can do several things such as manipulate the amplifier, modulate the pitch, create vibrato, and even reduce or totally eliminate certain harmonics.

With the kind of technology we have right now, there are visual studio technology (VST) plugins that can be accessed for free online that resemble hardware synthesizers. However, it does not exactly give a music creator the real sense of making unique music by not being able to do it through the use of the gear itself.

The tabletop and desktop synths are very popular and been heavily used in the home and music production studios.

Here are the top 7 tabletop synthesizers in the market today:

With the phrase, “Grain de folie,” printed on the front panel, which translates to “A touch of madness,” the maker Arturia dared to be different in offering something that VST plug-ins will not be able to deliver. Microfeak is s combination of digital oscillator and analog filter with a 25-key Paraphonic Hybrid Hardware Synth Poly-aftertouch Flat Keyboard. It is built just like a compact-sized classic synth. Still, it can deliver DSP audio engine very similar to Eurorak’s Mutable Instruments Plaits wavetable oscillators along with modulation matrix, filters, and arpeggiator.

The Microfreak is built very light, weighing just over 2 pounds, and with a capacitive keyboard instead of regular keys that are way easy to break. Hitting or pressing the keys in a different manner would generate a variety of tone values so that each sound would depend on the use of the fingertips. It can also run using USB power but with less voltage requirement as compared to analogue synths, and since it is digital, it is capable of having patch memory with 256 slots.

All in all, it is an affordable tabletop synth but with impressive capabilities that generally can only be found in the more expensive synthesizers.

A week following the launch of the regular MiniBrute 2 comes the keyboard-less version but with additional depth with its sequencing capabilities. Minibrute 2S is an Analog Synthesizer with VC VCO 2>1 Hard Sync and VCO1 linear and exponential. It comes with a white noise generator, Steiner Parker filter, and Notch modes along with Low, Band, and High Pass.

Patterns can be played and ultimately sequenced with its 64-step sequencer and arpeggiator. With creating patterns that can be chained up to 16, it would be easy to create a song.  The three-layer BeatStep-style sequencer makes it easier for the music creator to keep on giving sequencing parameter modifications on a layer and still be able to sequence notes on a second layer while also doing another one on the third layer.

One of the main best features of S2 is its four sequencing channels. The Pitch and Gate are allocated to the first two channels, while the remaining two are for Velocity and Pressure. It has more functions, such as pressing the velocity button would lead to a single track but with 13 different options. The same thing happens when pressing the pressure button.

The beauty of Minibrute 2S is that those patterns can be replayed and saved using the copy and paste function to one of the 16 RAM slots in the synth’s flash memory drive. S2 MIDI Control Center is a powerful software tool that, when connected to the host computer, unlimited pattern creations can be saved as well. The flexibility of the patch bay eliminates the hassle, wear and tear on the equipment jacks.

This is an analog desktop synthesizer that is highly inspired by the classic 80s monophonic synths. Behringer PRO1 Table Synthesizer is the best option for those who want access to a wide variety of classic synthesizer sounds packed in a desktop console.

This synth has many features to offer, such as dual VCOs, 4-Pole VCF filter design with resonance capability, simultaneous waveforms, modulation matrix with two buses to offer flexibility a built-in arpeggiator with three patterns, and a 16-voice polyphony chain. Furthermore, you can easily add a synth voice by connecting the Behringer synth PRO-1 module to the Poly Chain output of the existing module.

It is also MIDI-fied where MIDI input jacks are available with a USB connection capability.

Making new sounds with easy access to the best of the past makes Behringer PRO-1 Tabletop Synthesizer the ultimate choice for music-making enthusiasts. It has all classic designs but with modern tweaks that make it easier to use and eliminated parts that failed in the past.

This synthesizer is compact, but a bit on the heavy side, considering it weighs over 5 pounds. However, it is packed with an impressive sequencer with its four synth tracks, an FX track, a CV or gate track, 128 patterns on tap with 64-step per pattern, 16 songs onboard, and 6 arpeggiators with individual track lengths and parameter locks. The synth voice features a fully analog signal path with two oscillators, white noise generator, and assignable and dedicated LFOs along with several types of envelopes that are fast and customizable. However, expect a small multi-functional interface. The display is just there to provide information, but it has tiny characters that would pose a challenge for those without 20/20 vision.

Having a CV/Gate and DIN sync outputs makes Elektron Analog Four Tabletop Synthesizer even better to use as it can be connected to other components easily. Those CV/Gates are not mainly dedicated to any CV track, which means that it is capable of having four internal synths and run it with two external analogs at the same time. It also offers full real-time control and MIDI support.

With Korg manufacturing one of the best music equipment out there since its inception many decades ago, it is not surprising to see them release something like the Korg Minilogue. It is not only one of the most packed synths out there, but it is also one of the most attractive-looking ones today. Designer-Engineer Tatsuya Takahashi came out with a four-voice analog synth in which one can play four notes simultaneously. It has 200 program memory capabilities with 100 presents included,  8 different voice modes that can modify the four voices, and a 16-step polyphonic note and motion sequencer, which can be used up to four parameters, along with 8 different types of connectors for easy integration.

The control panel of the Korg Minilogue has 40-dedicated fully programmable controls with a slider for better control manipulation of all the parameters being used. There is also an onboard OLED oscilloscope display to monitor waveform shaping conveniently. The analog signal path has  2 VCOs, 2 EGs, 1 LFO, 1 VCF, and 1 VCA. The voice mode options are Poly, Duo, Unison, Mono, Delay, Arp, and Sidechain. It also has MIDI In and MIDI Out with a USB portal.

When compared with most four-voice analogue/digital synths, it is one of the most affordable. The slim keys on the keyboard may take some time to get used to, but if it’s not a deal-breaker, then this is the best choice for synthesizer beginners.

It took Korg many decades to bring back the wave sequencing technology. The production was discontinued in the late 90s, and it made a subtle comeback in 2004, but it was in the form of a soft synth. Today, the Korg Wavestate has eliminated the problems and mistakes of its predecessor with Wave Sequencing 2.0. Basically, it simplifies the process for easy use to compete with today’s synths.

It is not a nostalgic reissue, but it has a new design from the ground up. Unlike the Minilogue, it has full-sized 37 keys that most artists prefer to use instead of the slimmer version, but just like the Minilogue, it is also in a compact form and can fit in any set up on stage or inside the studio.

This tabletop synth has extensive hands-on modulation controls with on-screen parameters that would be enjoyable to use, especially for real-time live performance.

There are 64 stereo voices to choose from as well as a huge library with gigabytes of samples and modeled filters such as MS-20 and Polysix. The multi-effects processing capability would enable an artist to create production-ready results as one can easily put three effects on just one layer. It also has a master reverb along with four-band parametric EQ. It also offers distinctive features such as Overb, Reverse Delay, Talking Modulator, Wave Shaper, Multiband Mod Delay, collection of classic guitar pedals with VOX wah, and guitar amps. This is a top choice for professional sound engineers, producers, and songwriters.

For a powerful analog polysynth like the Korg Volca Keys Analog Synthesizer, the affordable price that comes with it is fantastic. It comes with the 3-note polyphony synth design, where one can easily create three-note chords and mixed them up for powerful lead sounds. A built-in delay effect adds to impressive dynamic sounds.

Musicians would be able to play with the built-in ribbon controller or through a MIDI controller that can be connected to the device. It can easily capture whatever is being played in real-time with the use of the Motion Sequencer. With just the use of a knob, you can effortlessly transform a simple sequence to something new.

One excellent feature of this tabletop synth is that it is incredibly easy to transport as it is portable and can run using the optional Volca Power Supply. With its universal interface, it can easily integrate with other devices such as MIDI input for the MIDI sequencer. It also has a way to connect with Korg’s Monotrone and Monotribe analog synthesizers or other Volca equipment with the Sync input and output jacks.  Sampling and sequencing have never been this easy. 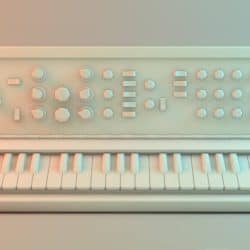 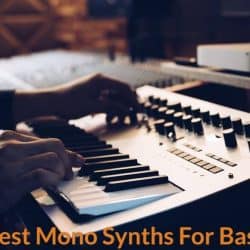 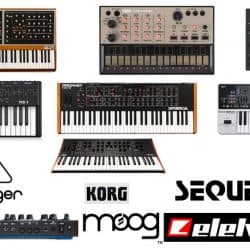 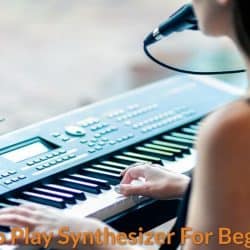 How To Play Synthesizer For Beginners 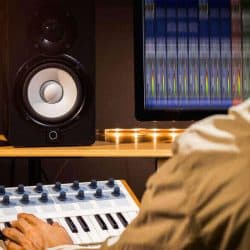